Thank you to the very large group of people who turned up for our #culturenight2017 Art, Architecture and Revisionist History walking tour. Instead of being a tour of the whole walled city, we only managed to do the upper half, since there were too many exciting distractions along the way. Thank you to St Columb’s Cathedral, St Augustine’s Church and First Derry Presbyterian Church for making us feel so welcome. 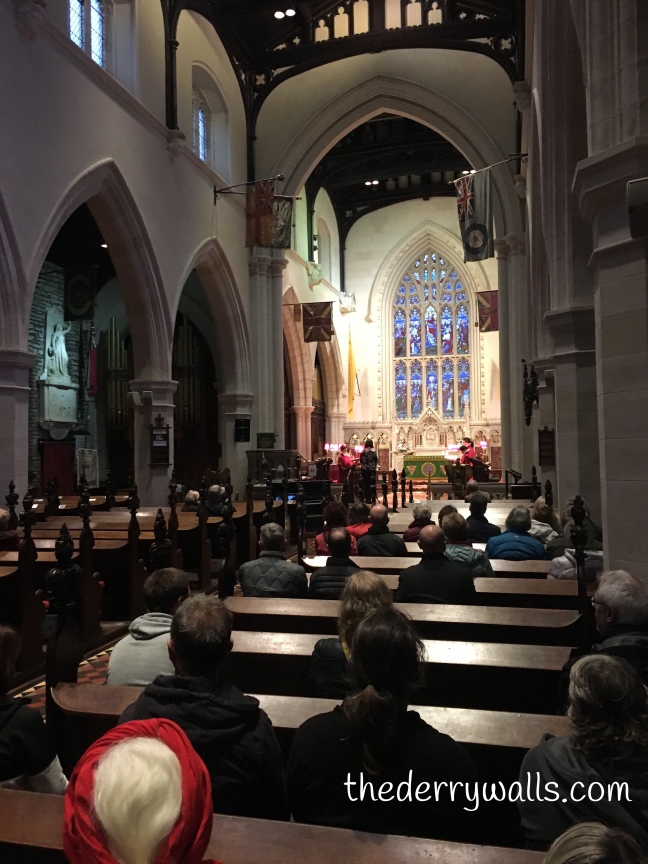 Every day is a school day and the new fact I learned was that the pew seats in First Derry had slots underneath to suspend your top hat from, during services.

It was great chatting to others such as Centre for Contemporary Art  and Smart Swag to find out how #culturenight2017 went for them. We promise we will do a full morning/afternoon and less manic Art, Architecture and Revisionist History Walking Tour when the seasons allow us to plan ahead. See our events page

Culture Night 2017 is Friday 22nd September and most of the arts and heritage venues within and around the Derry Walls are throwing their doors open with free taster events.  For the latest  information go to Derry Strabane’s Culture Night webpage.  Amidst all the excitement and cultural enrichment, Mark Lusby of the Friends of the Derry Walls will be conducting a guided walking tour of the Walled City, focusing on its architecture. Along the way he will be stopping at some of the arts and heritage venues, so you’ll be able to sample some of what is on offer, later. He’s arranged some some access-all-areas ‘passes’ so you can see some artworks not normally on show to the public. Expect some ‘revisionist history’ too as we all need to look at our given histories through fresh eyes. The tour starts at 6.30pm leaving from the foyer of the Playhouse on Artillery St. No need to book. Dress appropriately for the weather or for where you’re going on to later! The tour will finish at 7.30pm leaving you plenty of time to go to the other Culture Night events in the Walled City.

Some reflections on Derry Walls Day 2017 and European Heritage Open Days 2017 in the Walled City.

The Friends of the Derry Walls is an experiment. Can you establish a membership-led charity around a monument whose history is conflicted? Can you make history into an excuse for enjoyment and enrichment rather than something which defines and divides?  Can a deeper personal and collective knowledge of the history of a place, instil a greater sense of attachment to and value of that place?

With a maximum budget of £5,000, the Friends endeavoured this year, not only to mark another key stage in the building of the Derry Walls, but also to give support to the property owners within the Walled City who valiantly open their doors every year for Northern Ireland’s version of European Heritage Days.

So what did we do?

We assembled all the events happening into one events page on this site and we promoted the Walled City as a Great Place for a Great Day Out. 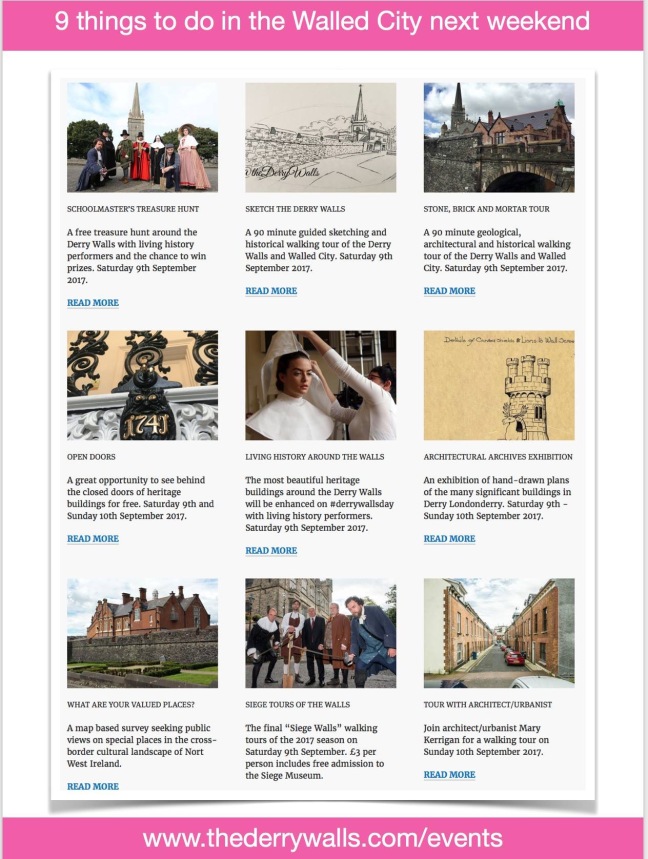 We enlisted the help of social media and anyone else we could rope in.

We created banners for each of the properties to let passersby know that the historic buildings were taking part in European Heritage Open Days. 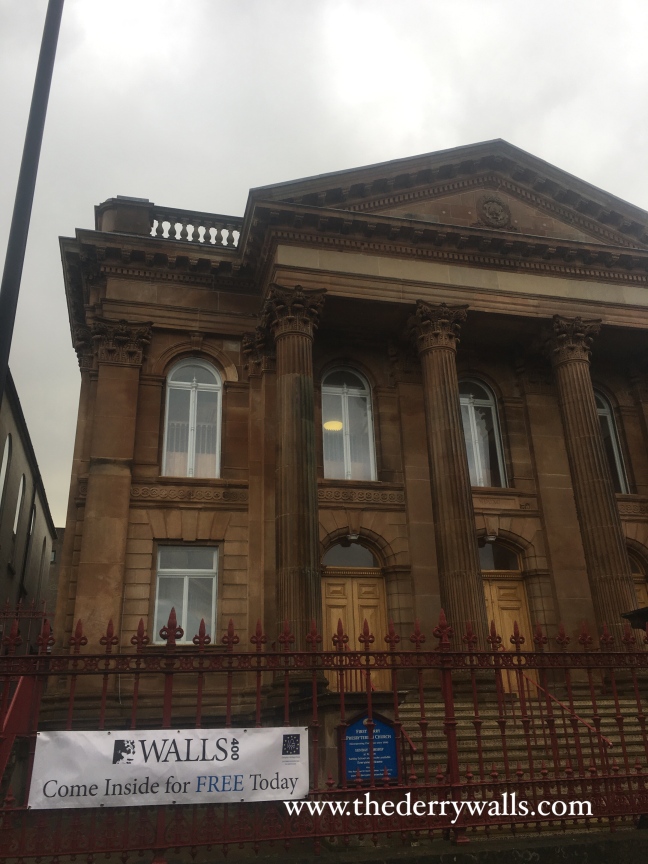 We assembled a team of living historians from the Playhouse, Footsteps and Past Pleasures to help bring the stories of the buildings alive: the 1617 Master of the Free School; a woman of rank recently arrived from London in 1617; an 18th century minister of First Derry; a 19th century nun. We created, in the Verbal Arts Centre ,an impression of a room in the Free School of 1617. 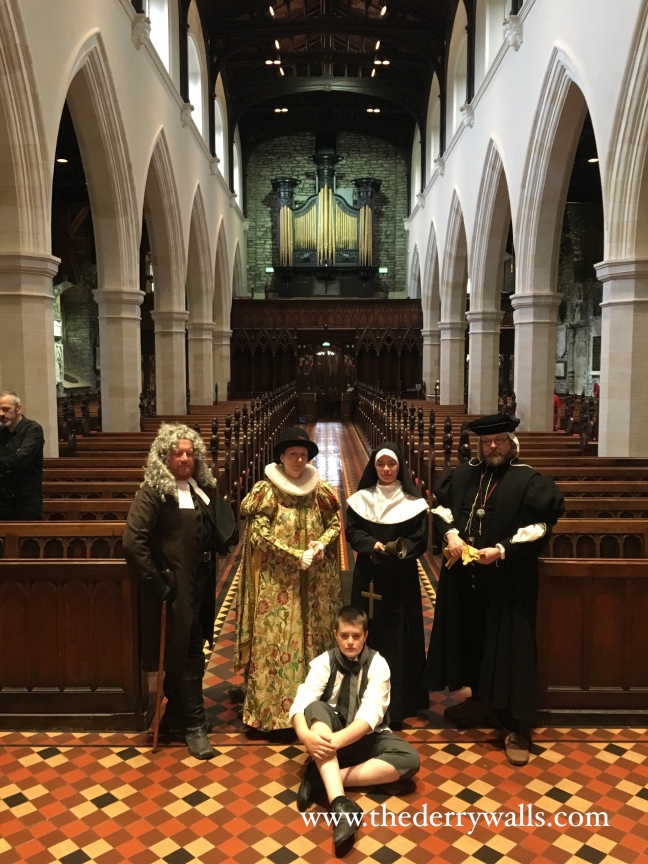 In the morning, we organised a tour about the geology of the buildings of the Walled City led by geologist William Lynn. 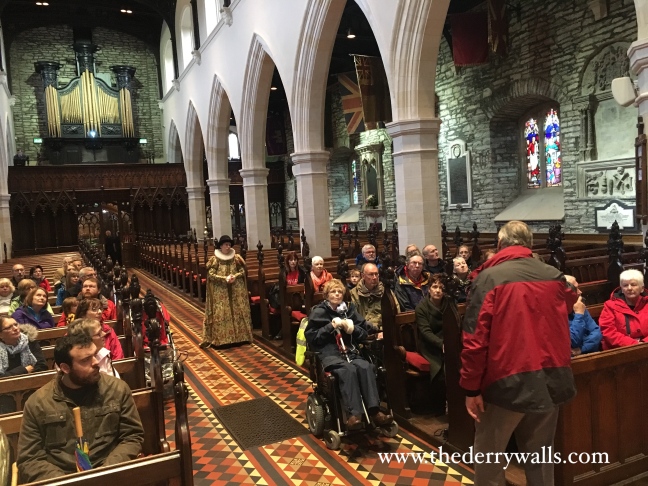 In the afternoon, we organised a sketching tour, led by fine artist and Derry song creative, Caoimhe Sweeney.

We wrote a Schoolmaster’s Treasure Hunt, encouraging people to move from property to property and to engage in conversation with the living history performers and guides in finding the answers to the questions. Prizes were provided by Foyleside. See how you would have got on, Treasure Hunt 2017!

We encouraged properties to put on special activities. The Guildhall put on an exhibition about their archive of beautiful hand drawn architectural drawings.

And St Columb’s Cathedral put on a special lunchtime musical recital on their organ. 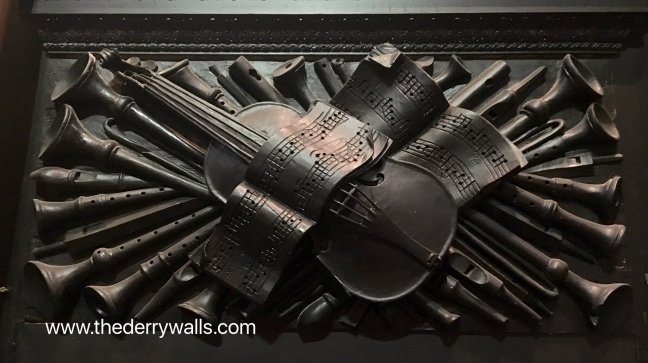 Andrew McClelland, a postdoctoral researcher at Maynooth ran a twitter conversation all day about what makes people value a place as a heritage site #myvaluedplaces

In spite of the weather, people turned out. Some initial numbers indicate the overall turnout: 38 on the Geology Tour, 26 on the Sketching Tour and First Derry recorded 574 through the doors.

Heritage Week, organised every August by the Heritage Council of Ireland, successfully mobilises communities in every county to discuss and showcase their natural and built heritage.  The Walled City lends itself to a similar exposition, discussion and celebration of heritage.

The most recent Troubles and the Siege are the two dominant themes of the Derry Londonderry narrative and rightly so. However presented as our sole stories, they tend to reinforce our bipolar green or orange cultural identities, and communicate that we are separate communities continuously in conflict with each other.

The 400 years old Walled City has a narrative which is challenging, complex, and rich. Imaginatively presented, the Walled City offers the opportunity for people who are looking for inspiration, entertainment, and enrichment to connect with others in a really great place. We saw a little of this potential yesterday.

2018 will be a significant year for heritage as both the Heritage Council of Ireland and the NI Department for Communities will be marking European Year of Cultural Heritage.   It also will be the lead-in year to the quadricentennial of the Derry Walls in 2019. The Friends of the Derry Walls will be meeting with our members over the winter to plan our   events for 2018. We would love constructive feedback on Derry Walls Day 2017. Get involved by becoming a Friend of the Derry Walls.

The theme of this year’s Halloween Festival is ‘Rise of the River Gods’  and from this evening the Derry Walls will be illuminated with the ‘Awakening the Walls’ lighting event. In support of Derry and Strabane Council’s  Halloween Festival, the Friends of the Derry Walls will be giving an illustrated talk and walk about the Architecture and Mythology of Bishop’s Gate with its River God Sculpted Heads. The talk and walk will start at 7.30pm in Number 1 St Columb’s Court, one of Derry’s earliest Georgian buildings within the City Walls, and currently undergoing a careful conservation programme. The introductory talk will be followed by a conducted tour by Mark Lusby of the upper section of City Walls from Double Bastion to New Gate, discussing history, architecture, archaeology and folklore along the way. The Walls will be a special place for such a tour this evening, given its animation with artistic light installations as part of the Awakening the Walls. The event will last about an hour in total, leaving plenty of time to take in the rest of the events on and around the Derry Walls this evening. There is no charge for the talk and tour. Please note that climbing of steps will be involved in exploring this part of the Walls.
The beautiful sculpted river god heads atop Bishop’s Gate have borne witness to events in our city, celebratory and tragic , ever since the Earl Bishop’s triumphal arch was erected in 1789. They were carved by one of Ireland’s greatest sculptors, Edward Smyth. They closely match two of the sculpted heads around James Gandon’s Dublin Custom House. In the early 1780s a virtually unknown sculptor, Edward Smyth had been commissioned by Gandon to design fourteen river heads based on traditional classical motifs and incorporating in their crowns  the principal features of the countries through which the rivers flowed. The work on the Dublin Custom House was completed in 1786. So when Edward Smyth was approached a few years later, by Irish architect Henry Aaron Baker, to add sculpted elements to the triumphal arch planned for the Derry Walls, it was natural that Edward would revisit the designs he had made for the Dublin Custom House, to illustrate the River Gods of the Foyle and Boyne.
In 1991 Michael Scott an  Irish Folklorist produced a book inspired by Smyth’s sculpted heads, creating magnificent tales telling the stories of the gods, men and creatures that lived on and upon these rivers. As part of the introductory talk this evening, Anne McCartney will read from Michael Scott’s legend of the Foyle River God.
54.994211 -7.323512