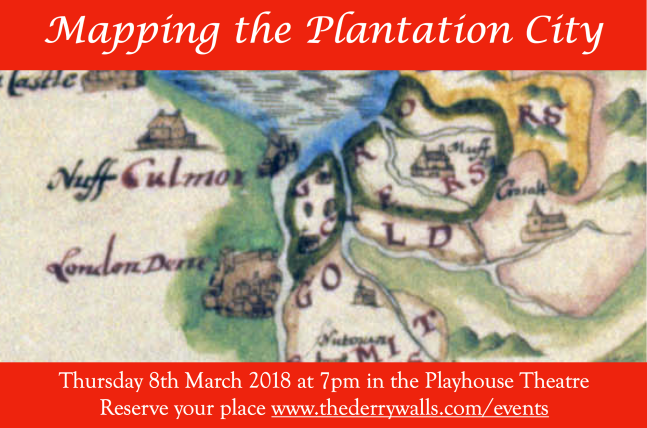 The final talk in the Winter/Spring lecture series takes place on Thursday 8th March 2018 at 7pm in the Playhouse Theatre on Artillery StreetNear the end of 1618, 400 years ago this year,  Captain Nicholas Pynnar, the official Inspector of Fortifications in Ireland, was appointed to survey the progress of the Ulster Plantation and specifically, the Works and Plantation performed by the City of London in the City and County of London-Derry so it is very appropriate that the title of Thursday evening’s lecture will be ‘Mapping the Plantation City’.
Dr Annaleigh Margey, Lecturer in History at Dundalk Institute of Technology will discuss the place of the walls in landscape and in perception with a particular focus on the livery company maps of the Londonderry Plantation. While to modern viewers, they appear as basic drawings with little by way of modern cartographic expectation, the maps became fundamental tools in the development and shaping of plantation landscapes in the city and county.Annaleigh is a Lecturer in History at Dundalk Institute of Technology. She studied for her BA and PhD at NUI, Galway. Her PhD research titled ‘Mapping during the Irish Plantations, 1550- 1636’, focused on the surveys and maps created by surveyors in Ireland during the decades of plantation. She subsequently held an Irish Research Council Postdoctoral Fellowship and a J.B. Harley Fellowship in the History of Cartography to continue this research at Trinity College Dublin. More recently, Annaleigh has worked as a Research Fellow at the University of Aberdeen on ‘The 1641 Depositions Project’ and at the Institute of Historical Research, London where she conducted research on the property and charity of the Clothworkers’ Company in early modern London. She has also worked as a researcher on a project at NUI, Maynooth and the National Library of Ireland focusing on the rentals and maps in the landed estates of Ireland collections in the library’s holdings. She has recently been awarded an R.J. Hunter Bursary to further her work on the plantations in Ireland, focusing specifically on the ‘Towns and the Londonderry plantation, 1609-1709: the urban network of a plantation county’. Most recently, she has edited a book with her colleagues Elaine Murphy and Eamon Darcy on The 1641 Depositions and the Irish Rebellion, and will shortly publish another book Mapping Ireland, c.1550-1636: a catalogue of the early modern manuscript maps of Ireland with the Irish Manuscripts Commission. She has written several articles on early modern mapping in Ireland, particularly on Ulster, and on the 1641 depositions.If you haven’t already done so you can book your place through the Derry Walls website www.thederrywalls.com/events 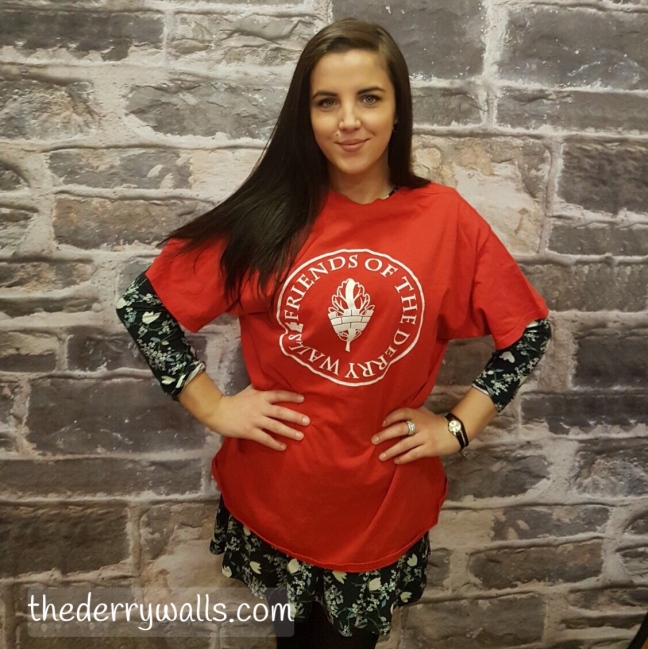 The Friends of the Derry Walls want to recruit 400 new members in time for 2019, the quadricentennial of their completion in 1619. The aim is to demonstrate the widest sense of ownership of and pride in the Derry Walls. A second objective is to raise funds for a major community archaeological dig in 2018.  Actor Jamie-Lee O’Donnell (Michelle from Channel 4’s Derry Girls)  was in the Guildhall yesterday talking to young people with experience of care as part Care Day 2018, endorsing their achievements and inspiring them to follow their dreams.  Also keen to help promote her home city, Jamie-Lee took time to pose in a Friends of the Derry Walls t-shirt.  Even Walls need Friends. Thanks Jamie-Lee. 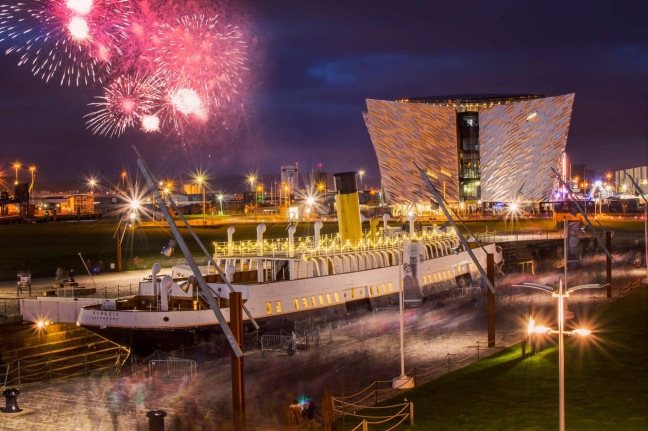 Festivals, like Halloween, are great opportunities to get photos, which reinforce the brand identity of a destination. I love this image of the fireworks over the Nomadic and the Titanic signature building so this Halloween I tried to get some Halloween pics on my iPhone with the Derry Walls in them. The Walls Friends would love to see yours, so please share them with us! # 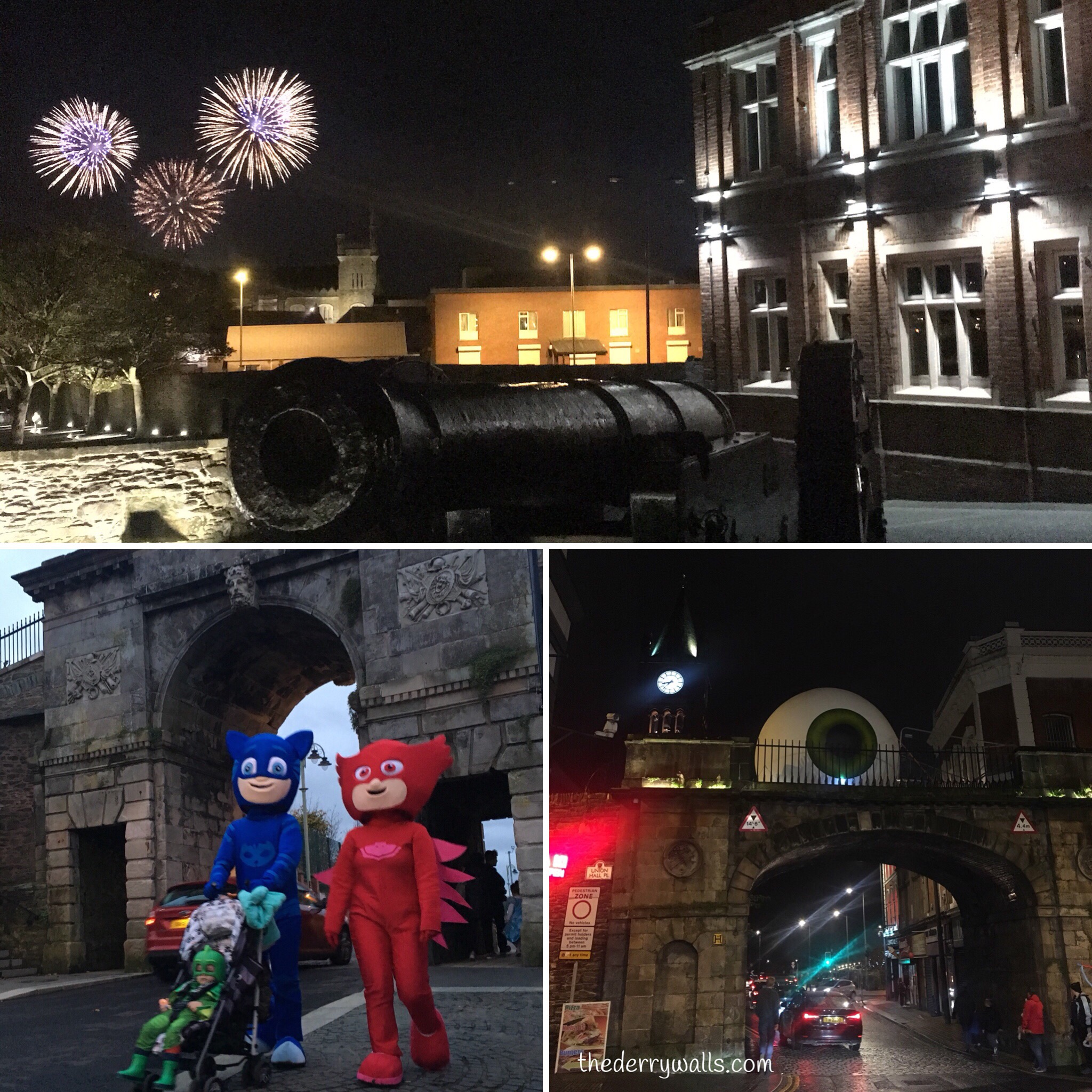