As part of Derry Walls Day 2016, Lorcan Doherty Photography, took some stills of the living history performers in the Walled City Museums. These hint at the rich diversity of stories ’embedded’ in the Derry Walls. Thanks to the performers from Past Pleasures, Claíomh, Footsteps, Blue Eagle and the Playhouse for helping our civic and community museums on Derry Walls Day 2016.

The best of living history performers from across Britain and Ireland are making final preparations to  bring the Walled City’s civic and community museums alive this Friday evening. As part of Culture Night, the Friends of the Derry Walls have arranged the  Swordsmith’s Treasure Hunt  from 4pm until 7pm and the richly costumed characters placed in the museums will  guide ‘treasure hunters’ to find the clues and help the 1616 Swordsmith finish his new sword. 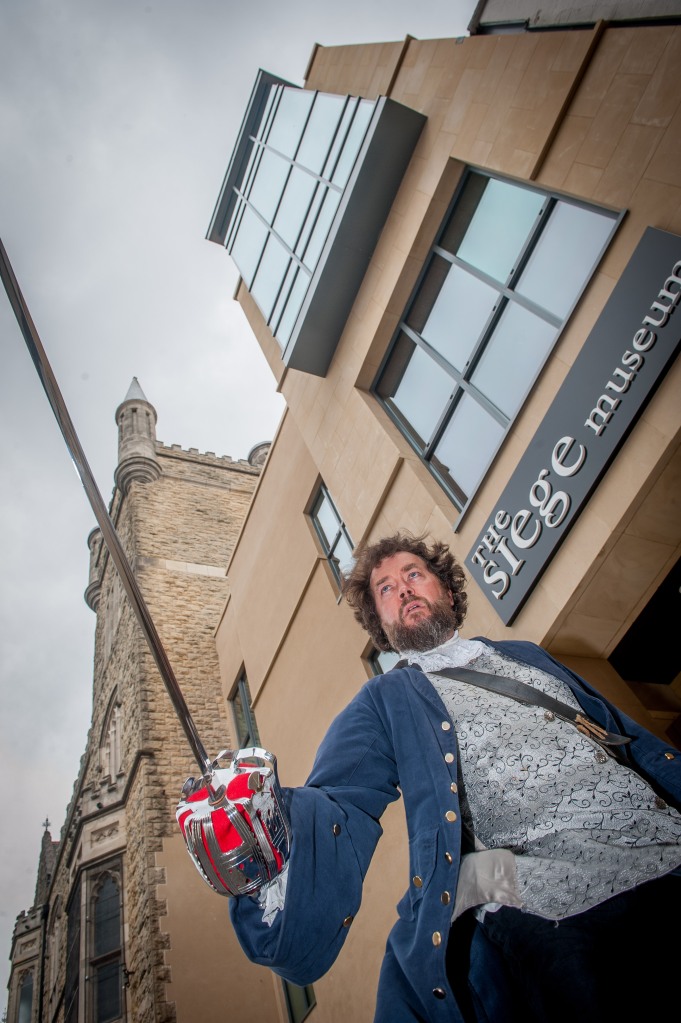 Footsteps from County Down will be providing a 18th century Minister for First Derry on Upper Magazine Street and a Victorian-era Gravedigger for St Augustine’s Church on Palace Street.

Direct from the Historic Royal Palaces in London, Past Pleasures will give an authentic voice to the 17th century builders of the Derry Walls with Peter Benson in the Guildhall and Mathias Springham in the Tower Museum.

Past Pleasures will also be providing two 17th century Swordsmith’s demonstrating their craft at the Society Street car park. In St Columb’s Cathedral will be the 18th century Dean’s Daughter.

Giving voice to the 17th century O’Doherty and O’Cahan clans will be Claíomh of Galway who will be providing demonstrations of sword-fighting in Guildhall Square.

The Swordsmith’s Treasure Hunt takes place from 4pm-7pm this Friday September 16th in and around the Walled City. Registration for individuals, teams and family groups from 3.30pm by Magazine Gate. You can pre-register here and have your Treasure Hunt bag ready for you on arrival.

As well as the Treasure Hunt, the living history performers will also be taking part in the Walls400 History Lecture 8pm-9pm in St Columb’s Cathedral and a Living History Afterparty 9pm-10pm in the Verbal Arts Centre.

£400 of local shopping vouchers to be won! Correctly completed Swordsmith’s Treasure Hunt forms will be entered into a draw for prizes of :

Registration and participation in Treasure Hunt is free is free!
The Swordsmith’s Treasure Hunt takes place from 4pm-7pm this Friday September 16th in and around the Walled City. Registration for individuals, teams and family groups from 3.30pm by Magazine Gate.